The History of Change – and Finding Solutions

Now, as our society faces one of the biggest challenges of our time, we prepare to use our technological development, transformation, and innovation experiences to find solutions to sustain our future. Solving significant challenges and finding opportunities is a central part of our history and who we are.

The history of Aker began in 1841 at ‘Agers mechaniske værksted’, a workshop situated by Akerselva, a river in Christiania, the city that became Oslo. The first managing director, Peter Steenstrup, had an engineering degree from England, and when returning to Norway, he talked about the industrial revolution with excitement. He was mostly in awe of the tremendous technical masterpiece, the steam engine. 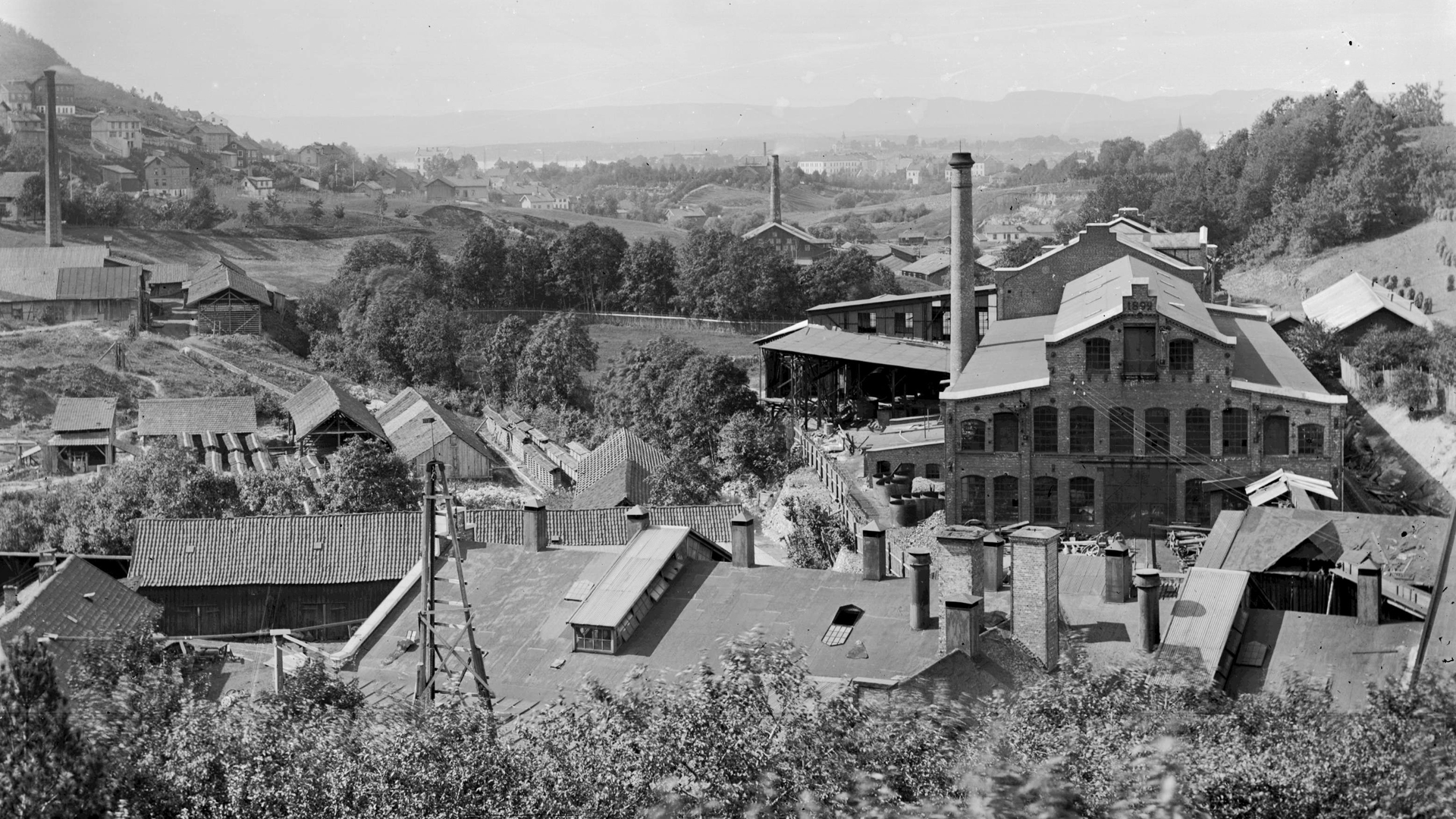 Some years later, in Lodalen, Kværner was founded by Oluf A. Onsum. For several hundred years, the village used a river to power windmills, or ‘kværner’ as Lodalen locals called them. Like Steenstrup, Onsum also had an engineering degree and was fascinated by the opportunities that came with the industrial revolution. He started producing several iron-products, such as plows for agriculture, tools, furnaces, and industrial ovens.

In the beginning, Aker delivered steam engines for sailing ships before expanding to steamships. As the years passed, the number of vessels increased, and the workforce expanded. A movement emerged in Norway to become independent from Sweden in 1905. The fear of war made politicians invest in the Norwegian navy to ensure access to ship repairs at a private shipyard. Aker was offered a large estate for commercial shipbuilding to establish a facility to meet the navy's needs. Aker thus established a new shipyard at Tjuvholmen in Oslo. Gradually, Aker's Mechanical Shop became one of the largest shipyards in the country.

Simultaneously, Kværner expanded its operations to become a leading supplier of iron and steel tools and parts for mechanical equipment to the increasing number of industrial projects in Norway. In the first half of the 1900s, Kværner expanded its iron and steel products production, making the company a prominent equipment supplier for the railroad, including steel bridges and train production. During the same period, the construction of several extensive hydropower plants was also initiated in Norway. This saw Kværner become the leading supplier of advanced hydropower turbines, developing technological innovations and patents. Step by step, Kværner grew to be one of Norway's most prominent industrial companies, and as the number of production facilities increased, several new product lines emerged ranging from pumps, turbines, and cranes. 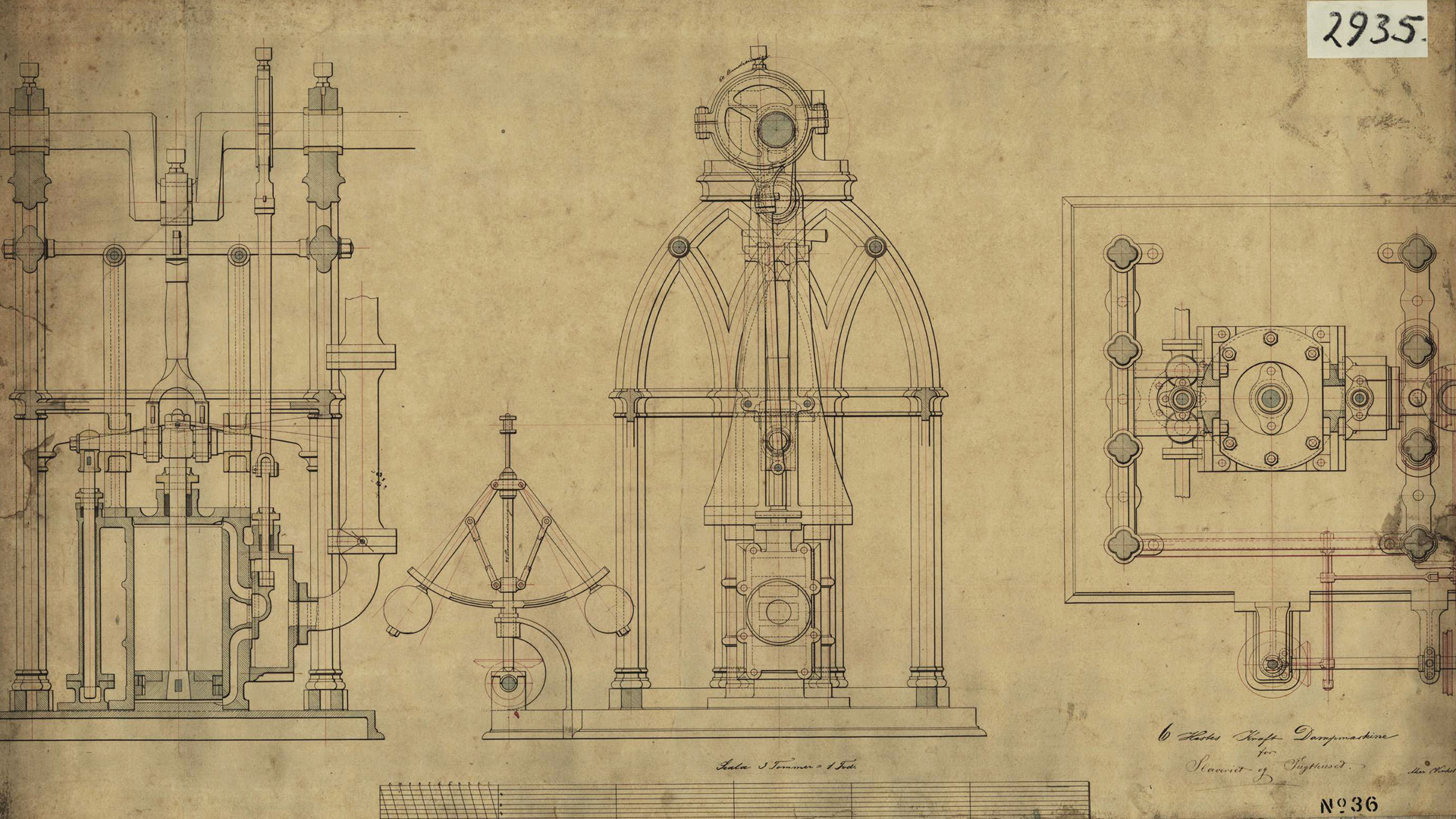 Ships on the Rise

During the second world war, a significant number of commercial ships were lost, and in the years that followed, ship owners across the globe were in great need of new vessels. The demand for a largescale shipyard soon followed, and Aker responded, establishing just that in Stord, Norway, delivering increasingly advanced ships.

At the same time, Kværner entered the business of building and installing steam turbine engines on merchant ships. With the acquisition of a shipyard in Moss, Norway, the competition between Aker and Kværner increased, and both sides stopped at no challenge. This competition continued for decades, with both maintaining dominant positions in the global market.

As the petrochemical industry grew, Kværner realized the importance of a niche market for liquid natural gas transportation (LNG). Naturally, one could not use pipelines to transport gas, and the demand for other means of transportation increased. The spherical vessels from Kværner were a breakthrough and an engineering masterpiece. Now, gas could be compressed and transported in a tank at minus 164 degrees Celsius even though the outside temperature often exceeded 20 degrees. Kværner developed the global market-leading design for LNG tank ships and revolutionized gas transportation with spherical-shaped cargo space. 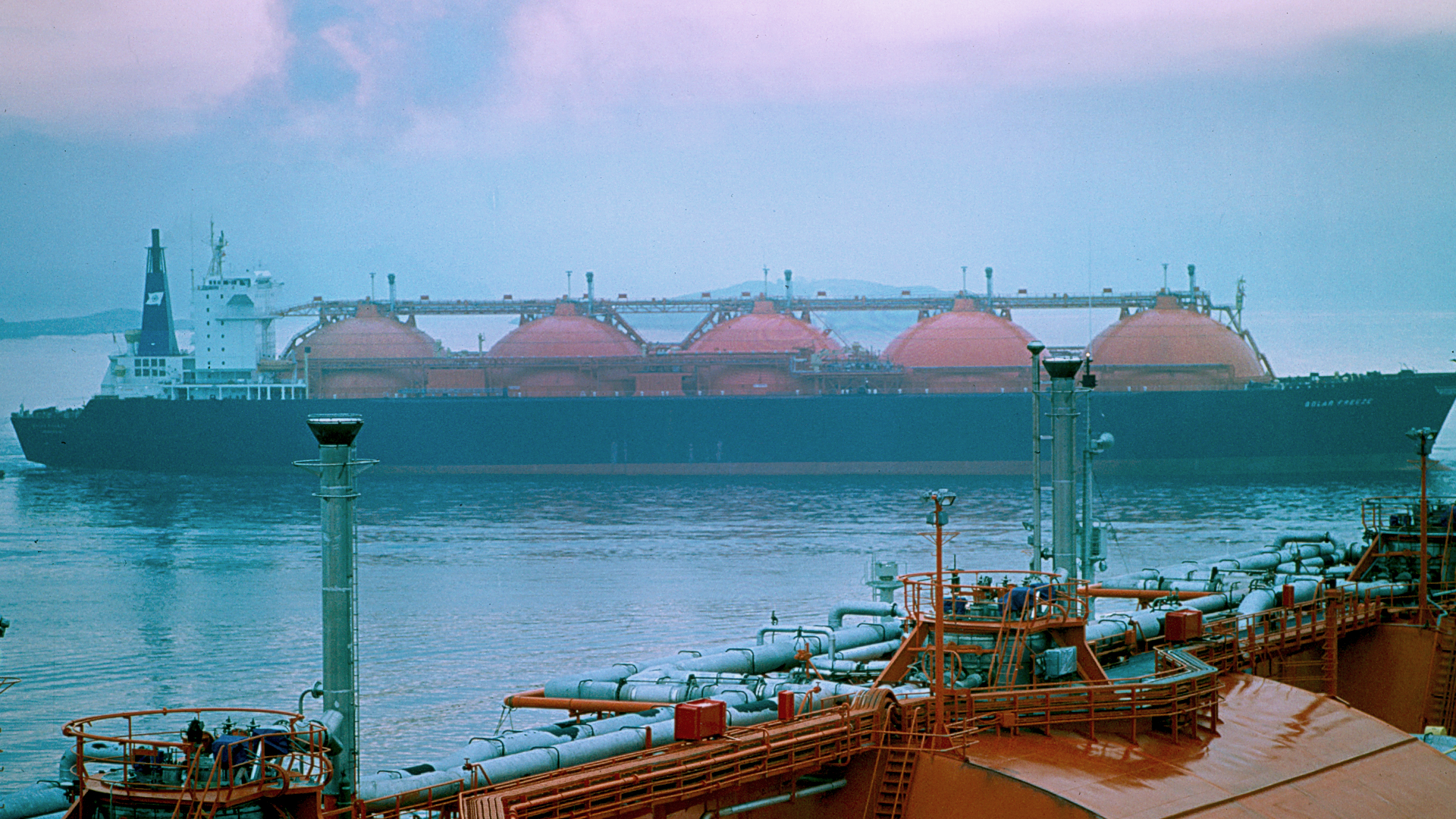 In the early 1970s, the future of the shipbuilding industry seemed bright. Aker's order backlog for new vessels also included seven super tankers, securing years of future work. When the international shipping crisis and the 1973 oil crisis hit, it greatly affected Norway and the unprepared shipping industry. As one of the world's major shipping nations, the situation forced Norway to watch all operations come to an abrupt stop, the market collapsing, and orders disappearing.

The global shipping crisis caused a significant overnight adjustment of forces. The shipping industry consisted of academics, finance people, and designers. Together they laid the foundation for an entirely new industry.

Before Christmas 1969, Ocean Viking discovered the Ekofisk oilfield on behalf of Philips Petroleum. The discovery turned out to be one of the most significant global oilfields, and shortly after, the Norwegian continental shelf was the location for several new oilfield discoveries. It was time for a new adventure, and both Aker and Kværner were ready to bring their full forces into this new industry.

The transition from ships to offshore oil was not a huge leap. Both industries involved waves, movements, and floating constructions. Despite neither Aker nor Kværner having experience in building oil platforms, they adapted quickly and recruited new engineers. To make up for the lack of oil expertise, Aker and Kværner cooperated with British and American companies. The Norwegian Government played an essential role in making sure the jobs were awarded to Norwegian companies. 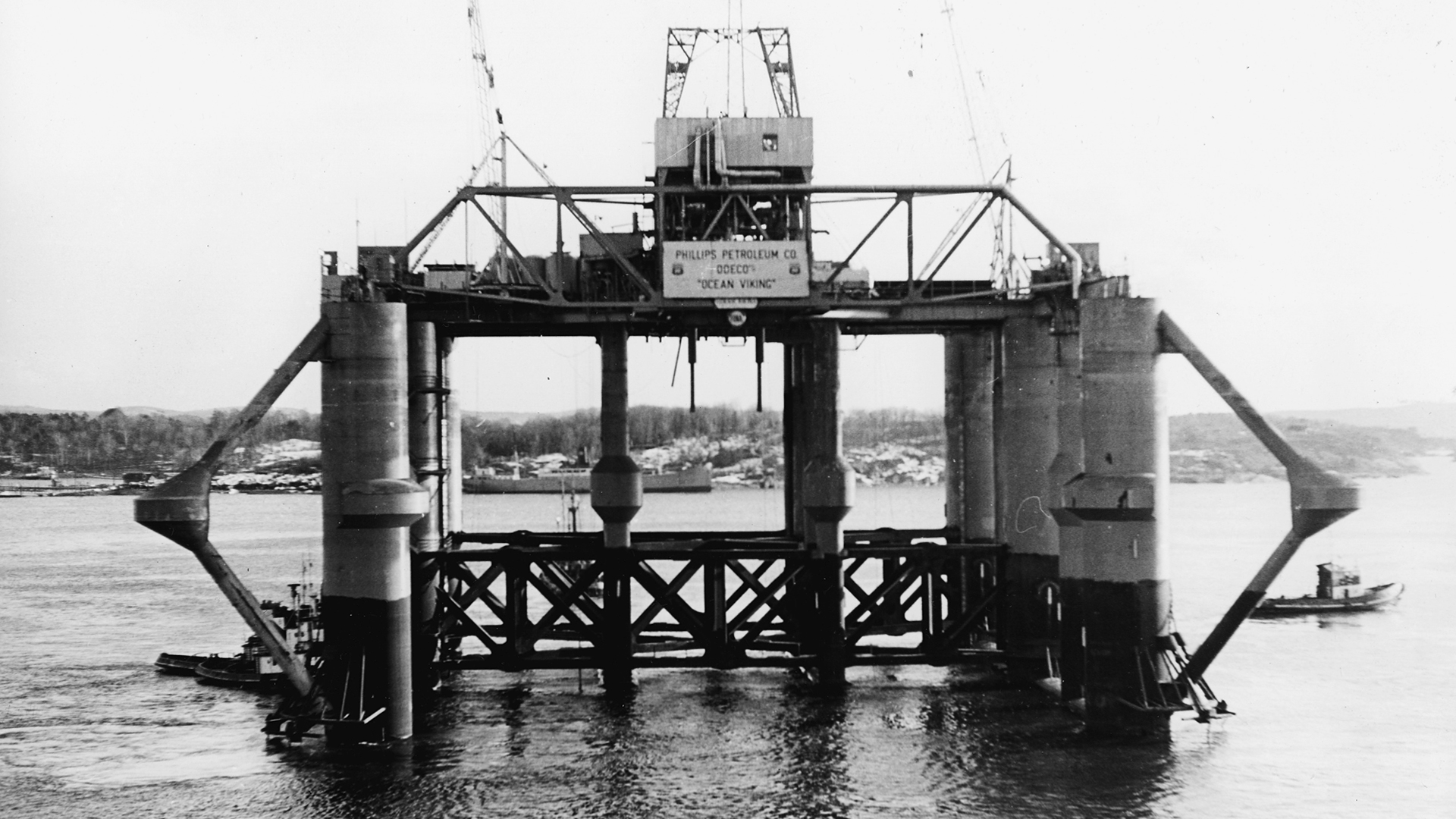 The beginning of the Norwegian oil adventure

The Most Used Oil Rig in the World

Aker's initial approach to the new industry was to subcontract engineering and production to oil and gas platforms and loading buoys. The first rigs arriving in Norway were built in the United States with the American oil industry in mind. As the American oil industry operates in shallow waters, it was not ideal for use in the North Sea under different climatical conditions, far from land. The Aker H-3 rig was thus developed, and it became one of the greatest floating platform successes.

An Aker engineer, Per Christian Sandnes is considered the father of the H-3 rig. After some calculations, he started developing different concepts and shapes for a new platform. With his American education, he discovered the less movement a rig experienced from waves, wind, and power, the longer you could drill. His calculations resulted in the H-3 revolutionizing the drilling rig market and becoming the most used oil rig globally. Aker built the first H-3 rig at the Oslo shipyard, and later the production expanded to Aker Verdal and Tangen shipyard in Kragerø. Even after 40 years of operations, H-3 oil rigs are still in use today. 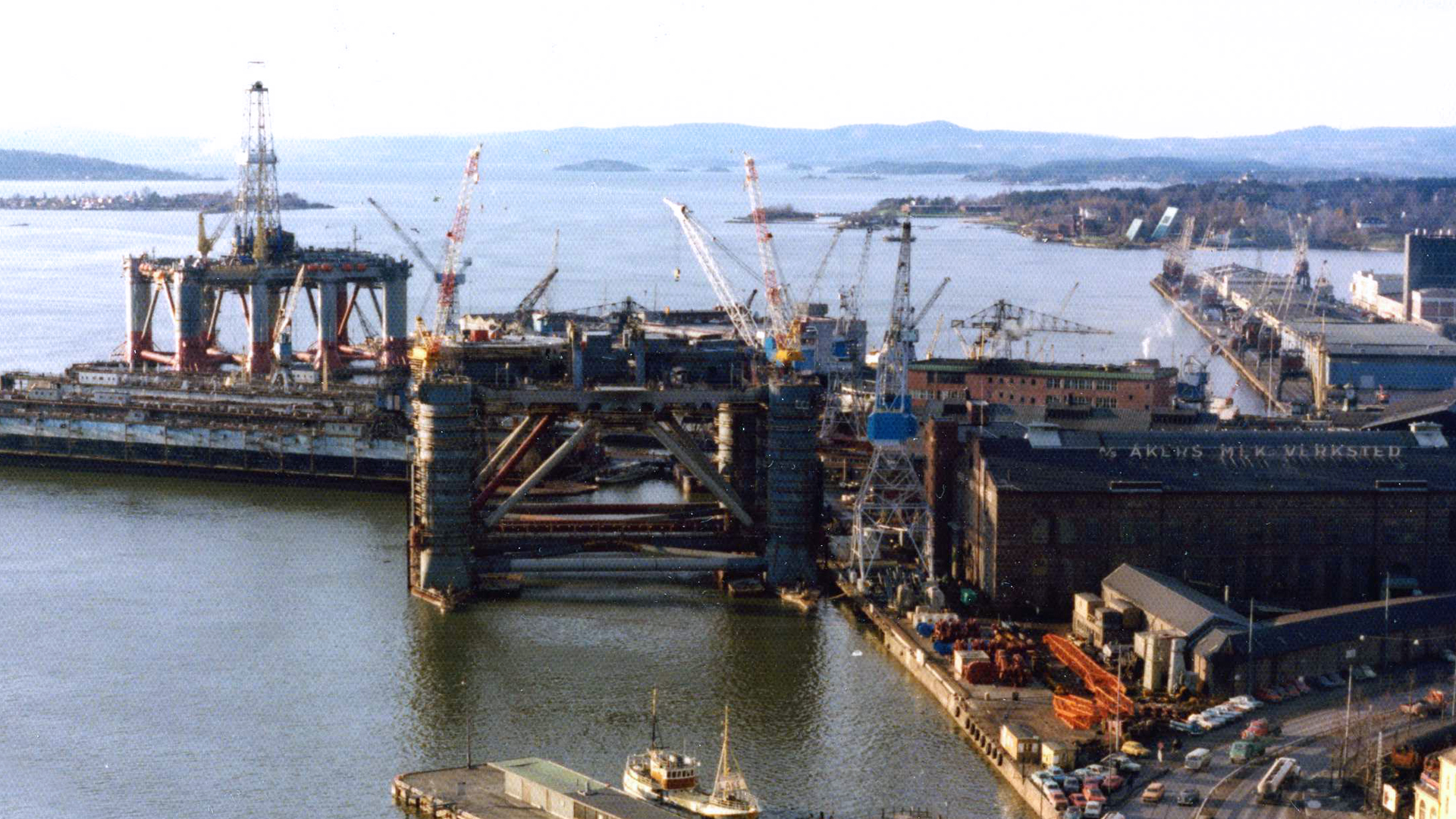 From Steel to Concrete Platforms

Following the merge with Norcem in 1986, Aker also became the global market leader in producing concrete substructures for offshore platforms. The concrete substructure was faster, simpler, and cheaper to construct than its predecessor, the steel substructure. It also solved some of the challenges at the existing Norwegian oilfields Statfjord, Gullflaks, Sleipner, and Troll. With floating concrete constructions, the substructure could be lowered into the sea quicker. Previously the method of connecting pipes and signal cables to the substructure and frame was a demanding, time-consuming and costly exercise.

The Aker and Kværner Merge

The two competitors merged in 2002. A reconstruction of the new company followed and continued until 2011. The focus was to cultivate the company as a leading global supplier of solutions to offshore and onshore oil and gas projects. Simultaneously, Aker took early steps to develop new solutions for renewable energy industries. Already by 2010, 49 offshore platforms to Nordsee Ost, the big wind power development on the German coastline, was completed.

In the last decade, several of Aker's deliveries have been to clients looking for oil and gas installations with reduced environmental footprint and customers developing facilities for the production of renewable energy. One example is the development of underwater facilities where parts of the processing of oil and gas are done on the sea floor, saving energy and emissions in the process.

Ready to Solve Hard Problems in the Future

Today, Aker Solutions has secured a strong and global position to deliver platforms for wind power at sea and has already produced about 60 installations. In October 2020, the construction of Hywind Tampen commenced, the world's largest facility for deep-water floating wind power platforms. Hywind Tampen marks the beginning of a new, Norwegian industrial adventure.

By 2030, Aker Solutions aim to have more than half of its operations in renewable energy and low carbon projects. For the time being, the company is preparing itself for huge floating offshore wind projects on the East and West Coast of the United States, Asia, and other regions. Simultaneously, the company considers possible projects to reduce emissions at sea, on land, and from concrete production across various industries.

The history proves that Aker Solutions and Kværner have always been able to succeed and adapt to market changes. You've read here only a small selection of solutions and changes where Aker Solutions has paved the way. Change is deeply rooted in our history. With experience from the deepest oceans, the harshest climates, and 200 years of evolution, Aker Solutions is ready to add new and proud chapters to its rich history.